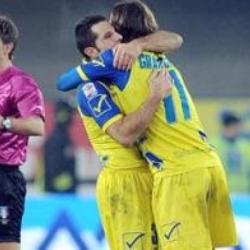 Two second-half strikes completed a Chievo comeback and a 2-2 draw against Roma on a dreadful pitch at the Stadio Marc Antonio Bentegodi.

In a match where passing football was rendered near impossible by the bobbly surface, Fabio Simplicio made the difference in the first half for Roma with a classy first goal and an opportunistic second.

Chievo came back at Claudio Ranieri’s side in the second half and grabbed a goal through Davide Moscardelli, and then secured a point through Pablo Granoche’s strike.