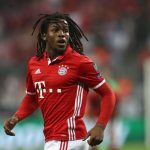 Reports have emerged claiming that Renato Sanches has spoken of why he chose Bayern Munich ahead of Manchester United when leaving Benfica last season.

United were convinced they had Europe’s best young talent in the bag, but Bayern shocked everyone when they announced a £30million deal which could rise to £68m.

And the player himself claims it was an easy decision to make once Bayern came calling, admitting the decisive factor was the confidence shown in him by the Bundesliga giants.

Sanches said: “I had a good feeling about it right away when I heard about Bayern Munich’s interest.

“They really put in a lot of effort and I immediately got a feeling the people in charge believed in me as a player. That was the decisive factor behind my decision to join Bayern.

“Ancelotti always looks calm and in charge. You can just see he has a lot of experience. He is getting involved with his players a lot and is helping players to make individual progress.

“But I am also playing alongside a lot of world-class players here. I can learn from all of them, especially from the players who play in midfield like Arturo Vidal, Xabi Alonso and Thiago Alcantara.”