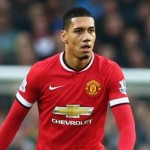 Reports are out claiming that Manchester United defender Chris Smalling was delighted to be back in action for their draw at Tottenham.

The England international says it was difficult to watch on from the sidelines during his recovery, having produced some impressive performances for the Reds this season, and is hoping to make his mark again in the new year.

“The injury was massively frustrating, but it’s good that I haven’t missed too many games, and hopefully I can get back into the side and begin contributing again,” he told MUTV.

“You have grumpy days! [when you’re injured]. It’s difficult when you see the other players out on the training pitch while you have to stay inside and take it slowly. We’ve been unfortunate – you tend to go through phases where you suffer no injuries at all, and then three or four will come along at once.

“We’ve not been able to stem the tide just yet, but hopefully in the new year we’ll have more players available for some important games.”