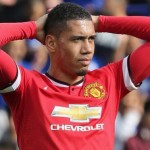 Reports are out claiming that Manchester United defender Chris Smalling insists they go to Hull City to win.

The Tigers need victory for any chance to beat the drop.

Smalling, who was named skipper last weekend against Arsenal, told MUTV: “We don’t have a great deal to play for but, as the manager has said, we always play for that pride.

“We’ll be going out there to make sure we finish the season on a high, and for all those travelling fans who come, we will give them something to sing about.”