It has been reported that Manchester United defender Chris Smalling says they paid for a “lack of cutting edge” after defeat to PSV Eindhoven. 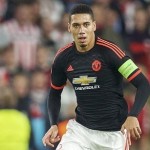 United dominated for chances created, but lost the Champions League tie with PSV.

“I think that we missed a cutting edge in the final third and in their box, and we needed to really try and make more of our possession,” Smalling told BT Sport after the final whistle.

“In the first half PSV scored from their only chance, a corner, and then we gave the ball away just outside our box and they punished us. They were really their main chances, so it’s a disappointing night.”