It has been reported that Chris Smalling has billed the midweek game against Club Brugge as the biggest of Manchester United’s season so far. 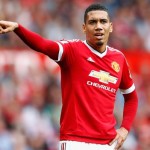 United dropped their first points of the season following a disappointing 0-0 draw at home to Newcastle United on Saturday and many have jumped on to criticize the Red Devils for their insipid performance.

Defender Smalling is not bothered though and is now concentrating on United’s ‘biggest game of the season’ against Club Brugge in the UEFA Champions League playoff second leg in midweek.

The England international said: “We haven’t got a full week to feel sorry for ourselves, we are disappointed about the Newcastle game but the good thing is we now have arguably the biggest game of the season.

“We will turn our attentions to that and we will take a lot of our positives from the first game when we played Brugge here.”