Reports are out claiming that Chris Smalling’s future at Manchester United is in doubt. 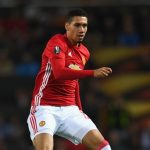 The Daily Express says the England man’s future could be in doubt if Jose Mourinho completes a deal for Benfica defender Victor Lindelof.

With Lindelof potentially joining the club that could spell the end for Smalling.