It has been revealed that Manchester United defender Chris Smalling sees his long-term future at centre-half. 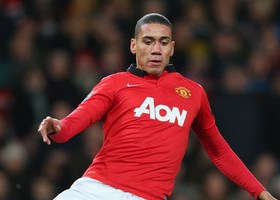 The 24 year old England international defender knows that versatility could prove a curse as well as a blessing for United and England – and insists that he wants to establish himself in the centre, for both David Moyes and Roy Hodgson.

The former Fulham defender said: “I am definitely looking to step up and play central defence regularly for this club, and at the minute I am starting to get a nice run of games there.

“I had to go to right-back in the second half at Arsenal due to Rafa’s injury which has happened a couple of times throughout the season, but I really want to cement that position in the centre. I am getting my chance and ­hopefully I can really take it.

“Being versatile and being able to play right-back can be a positive when it comes to England sometimes, but you don’t want it to become a curse for you overall.

“It will be a positive for me if I do get picked for the World Cup finals in Brazil. But the centre-back ­position is where I want to play – and that is where I really see myself playing in the future.

“You want to take on as much responsibility as you can, and to play in the heart of defence. When players move on, it can open the door to you.”