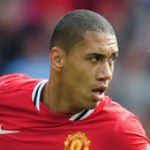 Smalling and Jonny Evans have already proved themselves to be able deputies when required and United also have the highly-rated Phil Jones in their ranks following his summer arrival from Blackburn Rovers.

Smalling said : “You don’t want to lose your big players,”.

“Rio and Vida are leaders. For years they have been the main part of this team and one of the reasons why we have won so much.

“But with the (England) Under-21s over the summer, we all said we were hoping to get a chance.

“For it to actually happen is a different thing entirely. But the manager has shown that faith in us.”