Reports are out claiming that Christian Benteke has spoken of his excitement at signing with Liverpool and his desire to win silverware with his new club. 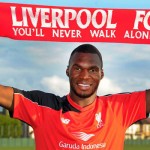 The Belgium international was officially unveiled as a Liverpool player on Wednesday after completing a £32.5million transfer from Aston Villa.

The Liverpool Echo is reporting the 24-year-old already has his sights set on winning major trophies at Anfield.

“I want to be the best and I want to reach the best of myself,” Benteke said.

“It’s about winning trophies. It’s about doing something in my career I can maybe explain to my son or my kids what I did.

“I think when I came here with Aston Villa it was a great feeling to play at Anfield. Now, to be in the home shirt is going to be an exciting feeling.”