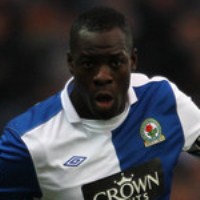 Blackburn Rovers defender Christopher Samba is has revealed that Aston Villa have made contact with their Premiership rivals for his services.

The Congo international has declared that he wants out of Ewood Park ever since boss Sam Allardyce was sacked by new owner Venky’s.

However, current Rovers boss Steve Kean remains hopeful he can persuade the 26 year old to stay at the club.

Villa were one of the first teams to be linked with the towering defender and now appear to have made concrete their interest.

“I heard about interest from Lyon, but there is no contact,” Samba told France Football.

“However, there is contact between Blackburn and Aston Villa.”