Reports are out claiming that Arsenal striker Chuba Akpom is happy to have committed to a new deal. 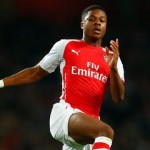 The England U20 international is convinced staying with the Gunners is the best decision for his career.

“It’s a striker’s dream to play with Santi Cazorla, Tomas Rosicky and those world-class players in the squad. They care about you on the pitch – they want you to get goals, they’re looking for you.

“They’re not selfish players. They’re good lads as well, genuinely nice people and you can only improve training and playing with those types of players.

“They were [trying to set me up against Aston Villa]. I appreciate that and I’ve just got to make the right forward runs to score and create opportunities for the team. I’m just getting used to it really and I’m just hoping for more minutes and learning every game.

“It’s really hard physically, mentally, everything. To make the step from the reserves to the first team is really hard as well, so it’s going to take a while to get used to but I’m really enjoying it and most importantly I think I’m capable of it.”