Reports are out claiming that Chuba Akpom believes he can be the man to deliver the extra goals the Arsenal boss Arsene Wenger is looking for. 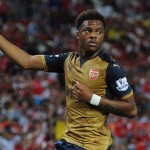 The 19 year old is ready to step up to the mark in the coming season – starting with Sunday’s Community Shield clash with reigning champions Chelsea.

“The experience for me and the other young players to get minutes and show people what we can do – we are all excited about the game at the weekend now.

“It’s nice to see the young players doing well and the boss says he will always give opportunities to young players who are doing their job.

“The main thing for me is for a manger to have confidence and faith in me so for the manager to say that he isn’t after another striker is good.

“But the hard work doesn’t stop there it means you have to maintain a place and there are a lot of good strikers and goals in the team so hopefully his season I can give it my all and be involved in the team.”