It has been reported that AC Milan chiefs Silvio Berlusconi and Adriano Galliani were meeting last night over the future of coach Clarence Seedorf. 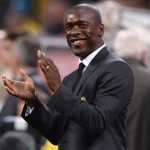 The iconic Dutchman is expected to be dumped, with both president Berlusconi and GM Galliani in agreement that a change is needed.

However, Galliani went into the summit hoping to convince Berlusconi to go with Unai Emery, the Sevilla coach.