Reports are out claiming that Barcelona goalkeeper Claudio Bravo has spoken of his admiration for Victor Valdes. 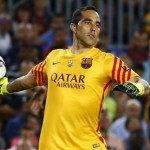 The former Barca keeper remains on the books at Manchester United.

Bravo said: “Victor can not be forgotten because he had an impressive career at Barcelona where he won practically everything.

“Personally, I feel very proud to defend the goal of the club. It’s a huge challenge.”