Reports are out claiming that Manchester City goalkeeper Claudio Bravo will remain at the club beyond the summer.

The Sun reports that the Chilean is determined to win over Pep Guardiola and win a place in his starting XI. 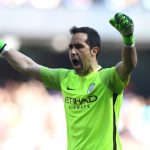 Bravo has struggled in the Premier League since arriving from Barcelona for £17million last summer but is believed to be taking English lessons in a bid to improve his game which has featured some high-profile errors this term.

Bravo has been in and out of Guardiola’s team, trading places with Willy Caballero, and there were suggestions that he could be off from the Etihad at season’s end.

Even with talk that City want Ederson Moraes from Benfica, it appears as though Bravo is eager to remain.

An Etihad source said: “Claudio is planning to stay for at least next season. He is now getting to grips with the language to help with the demands of the league.

“Pep wants to bring in a new goalkeeper, but Claudio has no intention of cutting his losses and running in his first year of his contract.

“He is willing to fight for his spot in the starting eleven and he is hoping once his English improves, his communication with his defence will as well.”