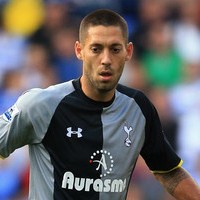 Clint Dempsey has revealed that he is already looking forward to facing Chelsea next week.

The reigning European champions have taken 19 points from their first seven games and have opened a four-point gap at the summit but this has not dented Dempsey’s confidence.

The United States international : “We know we can get results against the top teams, even away from home as we showed against United,”.

“We showed a lot of character in that game, especially in the second half, and it will be no different when we play Chelsea. We will all be up for it and wanting to get the job done.

“We’re in fifth place and we can go even higher than that. We are showing we have the quality but we’ve got to keep it going. It’s not just about a few games. It’s about being consistent for the whole season and that’s what we’re working on.

“We have a lot of confidence in our team, we work hard and we have a lot of quality. We’re happy with the run of results we’re getting and with the form we’re in, although we’re still trying to put together two strong halves of football.”