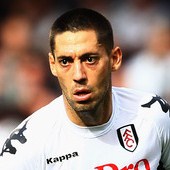 Clint Dempsey says Fulham paid for not taking their chances in defeat to Everton.

The Cottagers could have won the game late on, but it was Everton who took the three points 3-1.

“[Even after conceding early] You just keep playing, believing in your football,” explained Dempsey to fulhamfc.com.

“We knew we’d get back in the game and we did.

“We had two really good chances late in the game, but weren’t able to finish them, and right after that they attacked, created a chance and they were able to take it, so that was the difference.”

Roy Hodgson Named Manager Of The Year By LMA