Real Madrid won the Club World Cup with a 2-0 victory over San Lorenzo in Morocco. 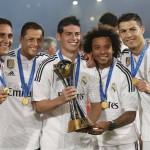 The game was ill-tempered from the start, with four yellow cards in the first half. San Lorenzo clearly had a plan to foul Real Madrid’s players in order to wind up their opponents and it worked as both teams had two men booked for snide, late challenges.

Real created few chances in the opening period, but Gareth Bale won a corner with a shot from the left, which was converted by a towering Sergio Ramos header.

In the second half, Real went two up when Sebastian Torrico let a Bale shot squeeze under his body, after Bale was left unmarked in the box.

Despite countless attempts from San Lorenzo players to injure Real Madrid’s, Real did not lose their composure and easily closed out the game for a routine win.

Royston Drenthe Linked With A Move To The Premier League