Reports are out claiming that Wales coach Chris Coleman says Arsenal midfielder Aaron Ramsey will be better for playing with Real Madrid star Gareth Bale at the Euros. 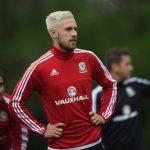 Coleman has backed Ramsey to thrive if the opposition fall for the trap that Wales are just a one man team.

“It will only be good for us if other teams spend all their time just thinking about Gareth,” said Coleman.

“I think it’s good for Aaron too, to be honest with you. Gareth doesn’t care, he’s got that personality where he just gets on with it.

“If Aaron flies under the radar he won’t have a problem with that.

“Some of his performances are the best I’ve seen from any Welsh midfielder, and that’s how good he can be. Gareth Bale will tell you good Aaron Ramsey is.

“When you’re on the ball as much as he is, there are going to be mistakes. But when you’ve got the imagination he has, he can open doors that nobody else can.”