Reports are out claiming that former Blackburn Rovers striker Anthony Modeste is on Arsenal’s radar. 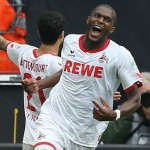 The 27-year-old, currently at Bundesliga side FC Koln, failed to impress at Ewood Park during his short loan spell in 2012.

But he has since rebuilt his reputation and has netted six goals in nine games this term.

According to Espiritu Deportivo, his current form has caught the eye of Gunners boss Arsene Wenger who is considering a swoop when the transfer window reopens.

Arsenal To Open Talks With Bayern Munich For Javi Martinez