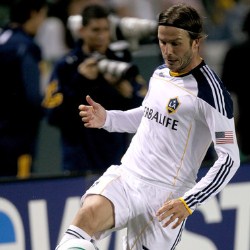 The Los Angeles Galaxy extended their unbeaten run to 13 games and increased their lead at the top of the Western Conference with a 1-0 win over the Columbus Crew.

The win moved the Galaxy four points clear of the Seattle Sounders, who were at the same time suffering a 7-0 friendly defeat against Beckham’s old club Manchester United.