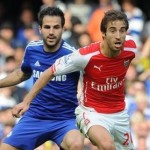 Arsenal’s £10million summer signing Petr Cech is expected to start in goal against former club Chelsea in Sunday’s Community Shield. The 33-year-old should get the nod from Arsene Wenger, with the Gunners fielding a largely full-strength line-up. Danny Welbeck is still battling knee trouble, with Tomas Rosicky also a way off fitness with a knee complaint. Beyond that Wenger can select from strength.

Chelsea striker Diego Costa is fit after withdrawing from the final friendly in the United States against Barcelona with a hamstring problem and is competing with Radamel Falcao and Loic Remy for the starting spot. Defender Gary Cahill is also available despite taking a blow to the nose against Barca as the Premier League champions face the FA Cup winners in the season curtain raiser.