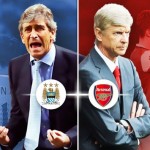 Per Mertesacker, Mesut Ozil, and Lukas Podolski will all be absent owing to their extended post-World Cup break while Olivier Giroud is a doubt after struggling for fitness in the friendly defeat against Monaco.

Manchester City will be without eight players for Sunday’s Community Shield clash with Arsenal at Wembley.

Frank Lampard is deemed not ready to feature yet following his arrival on loan, and the same applies to fellow new signing Bacary Sagna, along with Sergio Aguero, Pablo Zabaleta, Martin Demichelis, Fernandinho and skipper Vincent Kompany – six City players who were involved in the knockout stages of the World Cup.

Alvaro Negredo is the other man to miss out due to his foot injury, but there could be debuts for two new recruits in goalkeeper Willy Caballero and midfielder Fernando.