It has been reported that Arsene Wenger was full of praise for his Arsenal side following their surprise 2-0 win over Manchester City at the Etihad Stadium on Sunday. 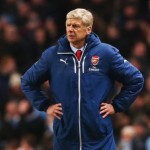 Goals from Santi Cazorla and Olivier Giroud either side of the break allowed the Gunners to keep in touch with the top four in what was arguably their best performance of the season so far.

In the wake of the monumental victory, Wenger spoke of his side’s ability to produce a more controlled performance against a side that hammered them 6-3 in this fixture last term.

“We have shown good solidarity, good discipline and good fight when winning the ball back, so overall I think it was a very complete performance tactically and I think it was a deserved victory,” the Frenchman said.

“I felt there was good urgency from our defence and good defensive focus when they had some pressurised situations in the second half in our box.

“And I am very pleased about that, because our defence has been questioned on a number of occasions, so to come out of the game with a clean sheet is important.”

The win saw Arsenal move up to fifth place on the league table, just a point behind Manchester United in fourth, and three in arrears of third-placed Southampton.

The Gunners will now prepare for next Sunday’s trip to Brighton & Hove Albion in the fourth round of the FA Cup.