Reports are out claiming that Arsenal are set to beat Real Madrid for Cruzeiro midfielder Lucas Silva. 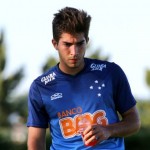 The Gunners are believed to have tabled the highest offer for the 21-year-old – a fee in the region of £11.9million – but he has his heart set on a move to Real Madrid, who are yet to agree a fee.

Marca reported that Cruzeiro have accepted Arsenal’s bid and await Real’s next move with the Champions League winners yet to improve on their £9.5m offer.

Silva is a defensive midfielder who has modelled his game on Yaya Toure and although yet to feature for the Brazil senior team, he is highly rated and was named in the league’s team of the year as Cruzeiro won the Brazilian league title. Arsenal’s Gabriel Paulista Proud To Provide For His Family