Reports are out claiming that Arsenal do not expect Theo Walcott to be back in action until December. 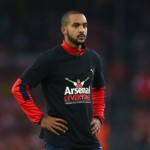 The England international came off in the Gunners’ 3-0 defeat to Sheffield Wednesday in the Capital One Cup on Tuesday.

“I believe the quickest back will be Oxlade-Chamberlain and Walcott might be a fraction longer,” Arsenal boss Arsene Wenger said.

“Both are out for tomorrow’s game [at Swansea] and until at least after the international break, so they are out as well for England.