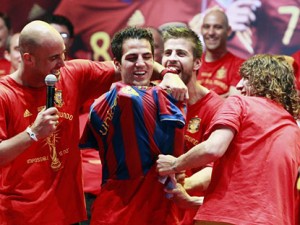 Arsenal chairman Peter Hill-Wood has confirmed Barcelona have made initial contact regarding a transfer for Cesc Fabregas, but no formal offer has yet been tabled by the Spanish and European champions.

Fabregas, a graduate of Barcelona’s La Masia academy, is a long-term target for Pep Guardiola’s side and recently admitted he was unaware of what his future holds now the transfer window is open.

Though Barca president Sandro Rosell is adamant the club will not pay “over the top” for the midfielder, it is believed he is a prime target for the club, along with Udinese’s Alexis Sanchez and Villarreal’s Giuseppe Rossi.

Barca is expected to raise cash for the Fabregas bid by selling off David Villa, the money raised from that sale plus the allocated 40m Euros for transfer will no doubt boost Barcelona’s pursuit of not only Fabregas but also Udinese’s Alexis Sanchez and Villarreal’s Giuseppe Rossi.

Arsenal are determined to hold onto their influential captain but Hill-Wood also admits he would not blame Fabregas for wanting to return to Catalunya.
“Yes, they have spoken to us about Cesc,” Hill-Wood told the Sunday Mirror. “They have been in touch. But so far they have not made a bid and we do not want to let him go.
“But he comes from Barcelona so it is understandable if he wanted to go back. However, they have not made an offer so far.”