Reports are out claiming that Real Madrid refuse to give up on their deal for Manchester United goalkeeper David de Gea. 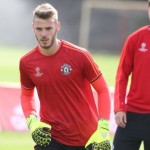 A total agreement between both clubs had been reached at 23:30 hours CEST.

However sources at the LFP confirmed that the relevant documents did not arrive before the midnight deadline.

It is now said that Real will attempt to show this morning that all contracts were submitted by 23:59. LFP, we understand, insist the documents did not arrive until 00:28 Tuesday morning.

Meanwhile, the collapse of the deal is being blamed on United. The Premier League club took their time translating the changed demands of Keylor Navas, who was to move to Old Trafford as part of the transfer.

Real officials were left hanging as United attempted to translate the change of terms Navas had requested late in the evening.