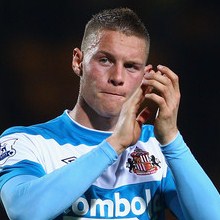 The 18-year-old had scans on Monday on the knee he damaged just seconds into Saturday’s 1-0 Barclays Premier League defeat at Manchester United.

On Monday night, Wickham revealed via Twitter that he had been given a more encouraging prognosis than expected, although he is yet to discover the full extent of the damage.

He tweeted: “Scans showing injury not as bad as first thought, waiting to see a knee specialist later in the week.”