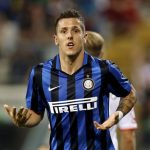 The Daily Star Sunday says Inter are legally committed to paying an additional £12.5million for him in the summer.

Inter have already paid a £2m loan fee for Jovetic, 26, but do not want to keep him permanently and are already seeking a buyer.

That is where Conte comes in, as he is a big fan of the striker and tried twice to sign him when he was in charge of Juventus.

Conte is still keen to work with the hotshot and his £90,000-a-week pay packet would not deter Chelsea from signing him.

Jovetic is seen as a talented player who would increase the striker competition at Stamford Bridge as Chelsea look to rebuild their squad.