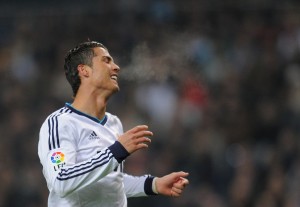 Cristiano Ronaldo struck a fine hat-trick to ease some of the gloom hanging over Real Madrid as they progressed through to the quarterfinals of the Copa del Rey with a 5-2 aggregate victory over Celta Vigo.

Trailing 2-1 from the first leg last month, Madrid took the lead in the tie with a first-half brace from Ronaldo. Celta were able to exert some pressure in the second half, especially when Sergio Ramos was sent off for a second yellow card. But Ronaldo’s third and a goal from Sami Khedira late on ensured Real Madrid’s progress to a meeting with Valencia after a 4-0 victory at the Bernabeu.

Madrid boss Jose Mourinho elected to start with Iker Casillas in goal in place of Antonio Adan, who had controversially been picked ahead of the club captain in the past two matches. With that situation at least temporarily put to one side, Madrid were given the perfect start as they looked to overturn their first-leg deficit as Ronaldo produced a stunning strike less than three minutes in.