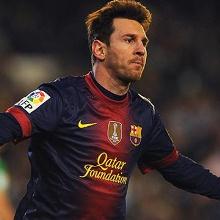 The apparently unstoppable Lionel Messi extended his record goals tally for 2012 to 88 when he scored twice to earn holders Barcelona a 2-0 win at second division Cordoba in their King’s Cup last-16 first leg on Wednesday.

On Sunday, World Player of the Year Messi overhauled Gerd Mueller’s goals record for a calendar year of 85 set in 1972 and he took only 11 minutes on Wednesday to add to his haul in a vibrant atmosphere at Cordoba’s packed Arcangel stadium.

David Villa sped clear on the left and he squared for Messi to clip the ball into the net off the underside of the crossbar from close range with the Cordoba goalkeeper stranded.

Fielding a near full-strength team despite the lowly opposition, Barca controlled the game in the second half before Thiago Alcantara released Messi on the left in the 74th minute and he finished low into the corner.