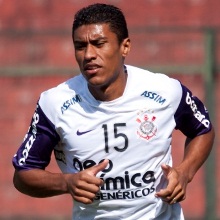 Corinthians midfielder Paulinho has dismissed speculation linking him with a move to Chelsea.

The 24-year-old Brazil international insists the talk of a move to Stamford Bridge is pure speculation as he focuses on playing in the Club World Cup – against Chelsea – in December.

He told Lancenet : “I once more can assure you that those stories are just speculation, I’ve never said otherwise,”.

“Whenever there is an opportunity, when an offer comes I’ll be the first to tell everyone about it.

“This is just more speculation. There was nothing. I’m happy here. We have the Club World Cup at the end of the year and I’m totally focused.

“It’s hard to deal with this kind of situation but I have a family and team-mates who help me do my best every day.”