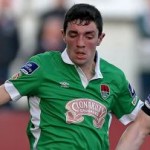 Lenihan was reportedly the subject of a failed £130k bid from Crystal Palace, while the Tigers have also made a bid for his services.

“Everyone knows who has watched him. Arsenal have watched him, Hull have,” said Caulfield.

“The official situation is that we received two bids and both have been rejected.

“One of the clubs has come back to us and we’re in negotiations with them but there’s still quite a bit of work to do. There’s a lot of talking to be done.

“Do I think that he’ll be gone across channel in the next couple of weeks?

“I believe that he will, and we have to make sure that we get the proper deal and Brian does too.”