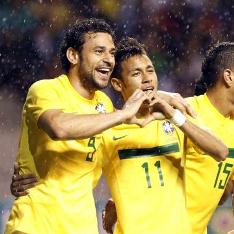 Neymar rescued 2014 World Cup hosts Brazil in a tougher-than-expected friendly with Costa Rica scoring the only goal against the run of play in a 1-0 win on Friday.

The 19-year-old forward scored his eighth goal in 14 matches for Brazil from close range, converting substitute Daniel Alves’s cross in the 60th minute. Neymar also hit the crossbar with a shot from outside the box in 72th minute, just before being replaced by Hulk.

Costa Rica finished the match with 10 players after Heiner Mora was shown a straight red card six minutes from time for a foul on substitute forward Jonas.