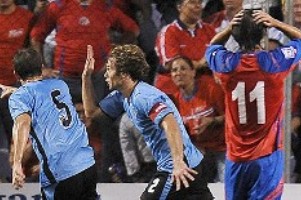 Uruguay have taken a big step towards qualifying for the World Cup finals after beating ten-man Costa Rica 1-0 away from home in the first leg of their qualifying play-off.

A first-half goal from Diego Lugano gave Oscar Washington Taberez’s side strong hopes of playing in South Africa next year, following their failure to qualify for the finals Germany in 2006.