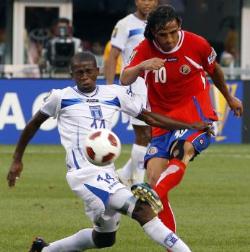 Honduras beat Costa Rica 4-2 on penalties on Saturday to reach the semi-finals of the CONCACAF Gold Cup.

The match, played as the first leg of a double-header at the New Meadowlands Stadium, finished 1-1 after normal time and 30 minutes of extra time.

Honduras converted all four penalties they attempted but two Costa Rica players, Celso Borges and Alvaro Saborio, missed theirs, both blasting their spot-kicks against the crossbar.

Saborio also failed to convert a penalty in the second half of regular time when Honduras goalkeeper Noel Valladares, named man of the match, guessed correctly and dived to his right.