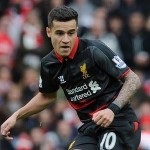 It has been reported that Philippe Coutinho believes Liverpool can save their season by winning the FA Cup.

The Reds look unlikely to finish in the top four after losing back-to-back games to Manchester United and Arsenal but can atone for those shortcomings by lifting the FA’s famous cup aloft.

Liverpool meet Blackburn Rovers in the quarter-final replay at Ewood Park on Wednesday night and Brazilian playmaker Coutinho is targeting glory in the oldest cup competition in world football.

He told Liverpool’s official website: “Winning the cup would save our season. It is very important for us to have that as an objective.

“We have to pick ourselves up after what happened against Arsenal to get the results that we need.

“It was a very difficult game but we have to pick our heads up and keep believing.

“We have to keep going. We have more games to come and lots of things can still happen.”

Mamadou Sakho Delighted To Be Back In Action For Liverpool