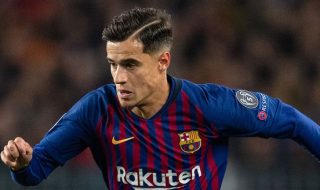 Philippe Coutinho has rejected a loan move to Tottenham, making a return to the Premier League unlikely before Thursday’s transfer window shuts.

Both Barcelona and the player would prefer a permanent deal but it is unlikely any Premier League team will match the £80m price tag.

Unsurprisingly, there were tons of rumours linking him with a move to some of the Premier League’s top clubs including Arsenal, Liverpool and Spurs.

Liverpool boss Jurgen Klopp stated earlier this summer the Reds will not be re-signing Coutinho, whilst Arsenal’s limited transfer budget and the signing of Nicolas Pepe will always make it a struggle for them.

Coutinho actually worked under Spurs boss Pochettino while at LaLiga club Espanyol in 2012, having joined on loan from Inter Milan.

Isaac Cuenca Out For Four Weeks With Hamstring Injury Alex Ferguson : It Would Be Difficult To Sign Cristiano Ronaldo!