Cardiff City striker Craig Bellamy was full of praise for his side after they managed to edge arch rivals Swansea City in the first Premier League derby between Welsh clubs. 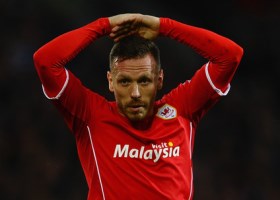 Steven Caulker scored a second-half header against the Swans, who he spent time on loan with in 2011/12, giving the Bluebirds an historic victory on home soil.

After the match, veteran attacker Bellamy was in a positive mood as Cardiff moved above Swansea and into 12th position on the table.

“It’s the third south Wales derby I’ve played in and every single one has been decided by one goal.

“It’s always a hard-fought game and today was no exception.

“As well as it being a derby, it’s a big three points for us as we really needed it. Next month we’ve got some really tough fixtures ahead of us.

“It was a home game and we knew it was very important, not just with it being the south Wales derby, but we needed three points as well.”