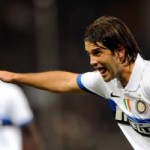 Inter Milan defender Cristian Chivu has been admitted to hospital after fracturing his skull in a clash of heads during Wednesday’s 1-0 Serie A win at Chievo.

It has been reported that the Romanian’s life is not in danger but he will have to stay under observation for some time.

Inter coach Jose Mourinho told reporters that Chivu has been sent to the hospital after he fractured his skull in a clash and the club hopes that the defender can come back as soon as possible.

The loss of Chivu is a blow to the Serie A leaders, who have no like-for-like replacement as Inter’s right-footed fullback Davide Santon is also injured.

Media reports said Inter were chasing Lazio left back Aleksandar Kolarov even before Chivu’s injury but Lazio president Claudio Lotito has said the Serbian is not for sale.

Mourinho, who has already brought in Macedonia forward Goran Pandev, also hopes the club can recruit another midfielder in the January transfer window with the little-used Patrick Vieira on the verge of leaving.