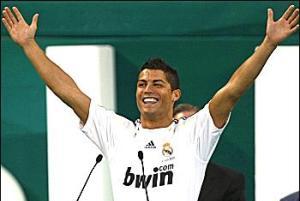 Real Madrid’s superstar winger Cristiano Ronaldo has accepted “substantial” libel damages from the Daily Mirror over July, 2008 allegations he had “gone on a bender” after undergoing a foot operation after playing for Portugal at Euro 2008.

The paper claimed the then Manchester United winger had downed drinks in a California nightclub before throwing away his crutches to dance and it was reported under the headline ‘Ron the Lash’,

Ronaldo, who claims he does not drink alcohol, also received an apology from the publication at the High Court in London.

A statement issued by the player read that he is delighted with the outcome as he takes training and recovery from injury very seriously and would never have ‘gone on a bender’ and danced in a nightclub without his crutches as the Mirror falsely claimed.

The statement also read that Ronaldo felt that he had no choice but to begin and pursue these legal proceedings. The statement thanked Sir Alex Ferguson and the others who were ready to appear as witnesses along with Ronaldo at the trial which had been due to start today.

QC Ronald Thwaites had told the courtroom that the report said that later on in the nightclub Ronaldo drank a number of vodka and sodas before switching to bottles of champagne.

He added that it described how one clubber claimed to have seen him throw his crutches down on the floor and try to dance on his uninjured foot… the truth is that the events did not happen as reported.

He went on to say that although the claimant was in LA and did attend the nightclub in question, he did not drink any alcohol at all whilst there as he takes his health, fitness and recovery from injury very seriously

It was also revealed that Ronaldo sat in a private corner under the care and supervision of the respected Portuguese national team physiotherapist, Antonio Gaspar.

The solicitor for publishers MGN Limited, Zoe Norden, told reporters that the defendant offers its apologies to the claimant for the distress, embarrassment and offence caused by this article.

He added that the defendant accepts that the allegations are false and ought never to have been published. It is therefore happy to set the record straight and to apologise to the claimant.