Reports have emerged claiming that Real Madrid star Cristiano Ronaldo has spoken of coming close to joining Arsenal ahead of Manchester United. 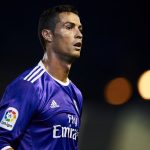 The 31-year-old Portuguese international star was snapped up from Sporting Lisbon in 2003 after he impressed against United in a pre-season friendly.

But things could have panned out differently if Arsene Wenger had secured his signature.

“It was not planned that United would be my team,” Ronaldo told Marca.

“Other clubs like Arsenal, Valencia, and Inter had enquired about me but we played against Manchester United and the rest is history.”