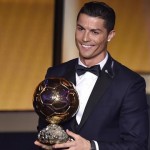 “I think about Manchester United,” he said. “The beginning of my career was there, that’s where I started.

“I know the fans are there supporting me.”

The Portuguese admitted he misses his former boss Sir Alex Ferguson very much.

“I haven’t had a message from Sir Alex yet but I speak with him often,” he added. “He told me to keep improving all the time. He said: ‘Cristiano, you’re the best, don’t worry about the rest’.