Reports are out claiming that Real Madrid superstar Cristiano Ronaldo has given Louis van Gaal the thumbs up at Manchester United. 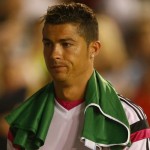 The Portuguese international says Van Gaal will bring success back to Old Trafford.

“It will be a better season for sure,” he told MUTV.

“My feeling is he is a fantastic coach, he showed them all the time for Holland, the team play unbelievable, good football and I hope to be honest that Manchester come back like the people knows.

“Always Manchester United are so strong, playing nice football, with a lot of goals and I’m looking forward.

“I was with Sir Alex when we won the Champions League, I was in doping control and he came in there to see me and to speak with me.

“Manchester United still need him because he’s been there for 20 years at the club and he wins everything.

“He is a Sir there in England so but I think Van Gaal is going to do a fantastic job.

“He’s an experienced manager and I think he’s going to do well for Manchester.”

Kaka Wants To Stay And Suceed At Real Madrid