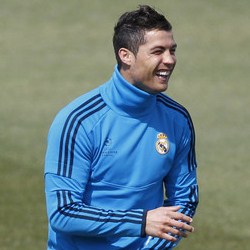 The Portugal international is confident it will be his side progressing through to next month’s final in Munich as Madrid seek a record 10th European Cup crown.

“We are well. I’m sure that at home we are going to win because we are playing in our stadium, in front of our own fans and we have everything we need to be able to win,” he told Bwin.com.

“It’s going to be a very difficult game, but I’m hopeful of a Madrid win. They played at home and won, but we got a goal there, which is also important.

“We know that Bayern, after the first leg, are to going to play on the counter-attack, but we also believe that they are going to have a lot of respect for us because we are playing at home.

“I hope we reach the final because it is very important to us players, to Real Madrid and to our fans throughout the world.”