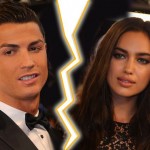 Reports are out claiming that Real Madrid star Cristiano Ronaldo has confirmed his split with long-time girlfriend Irina Shayk.

“After dating for five years, my relationship with Irina Shayk has come to an end,” the Portugal and Real Madrid footballer said in a written statement.

“We believed it would be best for both of us to take this step now.”

Ronaldo said he was making the statement to end speculation about the relationship and his private life.

“I wish Irina the greatest happiness,” he said.