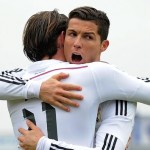 Reports are out claiming that Real Madrid star Cristiano Ronaldo saw more records tumble at his feet after his brace in victory at Getafe.

The Portuguese international has now scored 15 league goals against Los Azulones, now the Portuguese striker’s second favourite victim (only behind Sevilla, with 16 goals). Another bonus also came in the form of goalscoring records, putting him up alongside or above Messi and Raúl.

The former Manchester United star has scored 28 goals in the first half of the season, equalling Leo Messi’s record from the 2012/2013 season.

Also, before the game he had scored 87 away goals in La Liga, the same as Raúl in a white shirt. After his brace, Cristiano is now out on his own as Los Blancos’ top scorer away from the Bernabéu.

Cristiano Ronaldo Is The Symbol Of Portugal – Pepe