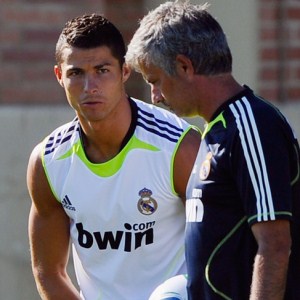 The Portuguese international winger, who was part of Madrid’s huge summer outlay 12 months ago when he joined for a world-record £80million from Manchester United, is optimistic his fellow Portuguese can bring the glory days back to the capital club.

“I have the feeling that we are going to win something this year. I don’t want to go two seasons without achieving anything, because I have ambition. We are going to improve,” Ronaldo said.

Whether that anticipated success comes in the Champions League remains to be seen, but that is a competition Madrid are desperate to do well in after years of mediocrity.

Ronaldo added: “Every year there is talk about the Champions League. We must have ambition to win it, but we shouldn’t put ourselves under pressure. At times it’s not possible to win every title.

“We need to take it step by step, think only about the group phase. The team is in construction and the coach is new.”


Luis Figo : I Wish To Have Played For Jose Mourinho!